Château Virant is named after the ancient rock château built into the nearby mountain side, locally known as the “Virant rock.” Originally named for the Etruscan-era God Wirant, this château dating from the 7th century BC was a place of wine trade. Fragments of amphorae, ceramic pots used to store wine, found during archaeological excavations date this activity to the Iron Age. Through medieval times, this castle was a place of worship, dwelling, and protection for the people. Its dominant position, high on the hillside, has always given it strategic advantages.

At the crossroads of ancient tracks and early roads, it alone controlled the entire plain bordering the Etang de Berre. It also served as a connection point between the interior regions and the sea port at Marseilles. No wonder this rock was so important throughout history. For centuries, this château has given its name to our property. Today it remains a magnificent site for climbing and offers a wonderful view of the majestic Sainte Victoire to the east and the Sainte Baume national forest to the south, another must see in Provence.

The Cheylan family likes to think of this “Virant rock” as the benevolent protector of the entire Château Virant.

The underground cellar is born. Little is known of this period. It is assumed that at the time, the fruits of the harvest were poured directly into the cellar via an above ground chute. Indeed a terracotta duct which descends from the ceiling seems to support this theory. Today, this special place houses our best wines, aging in oak barrels.

The main cellar is built by Edmond Thery. His initials, along with this date are carved into a lower gable of the main wine cellar. Thery was a famous French economist, Grand Officer of the Legion of Honor, founder of the European economist, and a member of the Academy of Agriculture of France. Upon his death, he leaves a great intellectual legacy. The château remained in his family until the 1950s when the cellars and the property were abandoned.

Robert and Noële Cheylan buy the cellar and the lands of Château Virant. The entire property is totally abandoned. They also purchase the “Virant rock” in order to be able to justify the name of Château Virant because this majestic rock is the true lord of the domain. The adventure begins. Both Robert and Noële are the children of farmers. They are self-taught, and they have a vision to restore the place to life. For thirteen years, they will invest all of their money and all of their time in renovating Château Virant: the cellars, the vineyard, and the olive grove. Through hard work, self-sacrifice, and courage, they will shape Château Virant in their image.

Robert and Noële export 250,000 small olive trees to Libya to grow in the fertile fields there while they prepare their own lands for cultivation. Throughout the winter of 1976, Robert used a cattail to detach the offspring (called gourmands) which appeared at the foot of the trees. Potted, these small olive trees go to Libya to grow and flourish. The money earned in this endeavor allows the renovation of the cellar to begin. 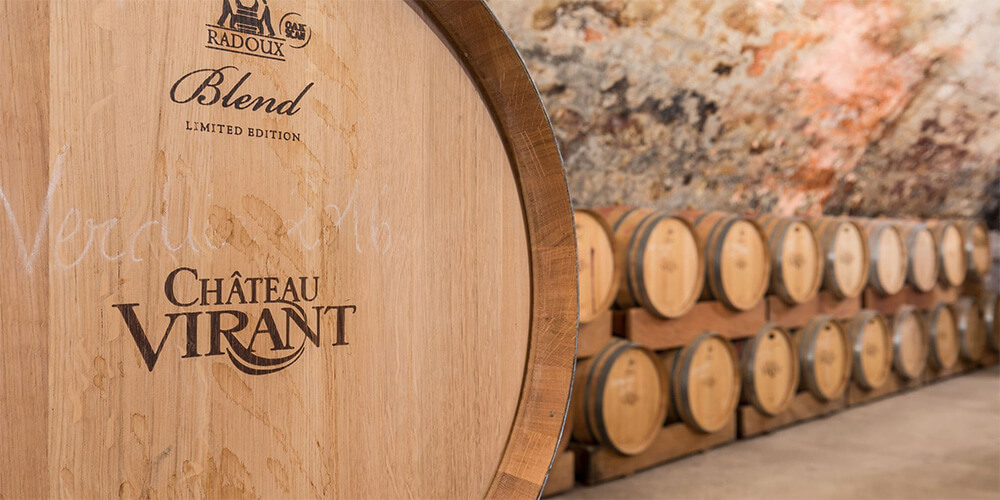 Robert and Noële Cheylan produce their first vintage. After waiting impatiently for this moment, they begin to realize their dream.

Robert and Noële begin bottling their wine for sale. Success is immediate. The estate's rosé wine is recognized as a premiere wine at the Aix-en-Provence lyric art festival.

Their son Pascal joins them after his agricultural studies are complete, and he learns the secrets of the lands and the trade from his father. He quickly becomes the manager of the estate.

Their daughter Christine returns from Canada after studying for a doctorate degree. She creates the first oil mill on the property to process the estate's olives. Like Pascale, she has learned the trade from her family, but she also brings the rigor of a researcher. At this time, the property has 12 hectares of olive trees and 70 hectares of vines. Everyone's strengths, wills, and ambitions unite and Château Virant is growing and developing quickly. Purchase of land, the use of modern production tools, the culture of detail, and a constant quest for quality all propel the Château Virant forward and help make it one of the most beautiful properties in Provence.

A former sheep pen on the property dating from 1632 is transformed into a banquet room to host family events, business seminars, exhibitions, and concerts. All of these events and more can now take place by making a simple reservation.

Due to an increase in demand, the family decides to build a second olive mill on the estate. The first had become too small because of the more than 3000 local producers who also bring their own olives to the mill for processing. From 1kg of olives to several tons, each customer leaves with extra virgin olive oil made from one 1st cold extraction. The Château Virant mill brings together a large community. The estate is open to visitors and neighbors year round for demonstrations, tastings, and cultural events. The Cheylan family invites you to join them for the pleasure of sharing the fruits of the olive tree and the grape vine.

Château Virant purchases Château Beauferan and begins to rebuild another beautiful property in the Aix-en-Provence Protected Appellation. Château Beauferan is a valley property of 144 hectares where pines, oaks, and scrubland surround 65 hectares of grape vines. The soil on this property is excellent for producing high quality grapes. Mostly clay-limestone, this diverse soil brings a unique expression to its wines. The Cheylan Family hopes to revive this long neglected vineyard. Hard work, expertise, and unfailing passion are needed to once again restore nobility to this property through its wines.

With the Cheylan family’s careful guidance, It looks like history will be repeating itself at Château Beauferan.